One year ago, we had a crazy dream for our Piaggio Ape…to teach it how to ski. Because as they say, “Norwegians are born with skis on their feet.”

Since 2020, we have been placing our fleet of Piaggio Apes around the globe to function as pop-up shops. With the ambition to take this concept to winter destinations, we dreamt of installing skis and having winter pop-ups at ski slopes around the world.

“We have been aiming to open a winter-based pop-up boutique for years, and with the Capmobile it got a lot more feasible. When we got the idea of making skis for it, it didn’t take long until we started joking about skiing it. The idea quickly escalated and became a little challenge we couldn’t resist, a perfect mix of unknowns, fun and danger! “
- Sebastian Adams, Co-founder and Capmobile Pilot

The end goal was to ski the Capmobile from the top of Kikut at Ski Geilo down to the bottom. What might sound simple, was actually very difficult and posed multiple safety issues. To prepare for the test, the Varsity Headwear team pulled together to design their own systems in order to ensure the highest chance of success. Prior to arrival in Geilo, the team worked with a local blacksmith to craft a custom braking system and enlisted the Varsity Headwear design team to develop a parachute in the case that the brakes might fail. 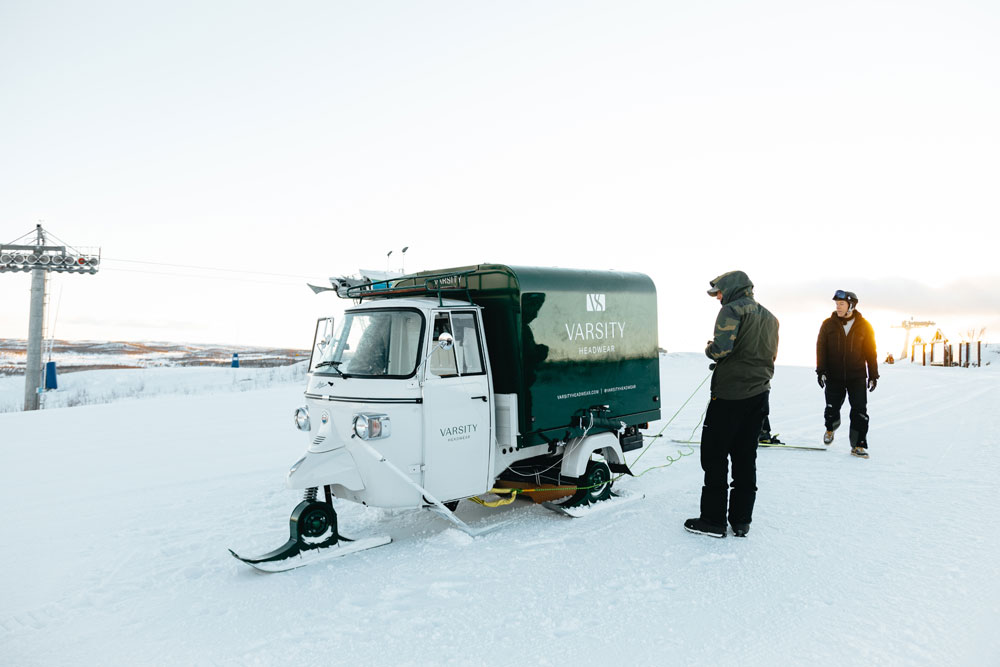 “A person can easily get up to speeds of around 100 km/h on skis, so we were then pretty nervous of what 900kg of metal could achieve down an icy ski slope. However, we quickly realized that directional stability, which could cause the Piaggio to flip on its side, was our main challenge, not speed.”

After a sleepless night, Sebastian woke up at 5 am to build a stabilizing unit for the bottom of the Piaggio as a last effort for a successful mission. At 9 am the Capmobile was launched down the ski slope, gaining speeds of up to 60 km/h. It managed to carve its way down the mountain to a successful finish at the bottom.

“All-in-all, this mission was a success for our team, and as far as we know, we are the first to ever ski a Piaggio since the company’s founding in 1964—which is pretty epic and shows the crazy Norwegian spirit in our team! We can’t wait to ski it more and are already asking — where should we go next?’”

Answer a few questions and we will try to find the right cap for you.